Middle Tennessee is a known freshwater hotspot for biodiversity, and the Duck River is considered the most biologically diverse river in the United States. In the maintenance of a healthy river ecosystem, the conservation of biodiversity is a crucial yet difficult measure due to the complexity of fluvial environments. Over the course of five weeks, data was collected on chemical indicators and macroinvertebrate abundance, representing water quality and biodiversity, respectively, to assess the effects of water quality on macroinvertebrate populations in six Duck River tributaries. Harmful concentrations of chemical indicators were expected to affect macroinvertebrate populations negatively. Significant differences between streams were observed in pH, water temperature, and electrical conductivity (p <0.001), reflecting differences in site factors. Pleurocera freshwater gastropods were significantly more abundant in site four than in the remaining sites, which negatively correlated with high electrical conductivity (p < 0.05). Significant correlations were observed between differences in water quality and species abundance by stream (p < 0.05), which may provide further evidence of the effects of alterations on stream ecosystems. Additional application of water quality assessments will allow for the more effective implementation of conservational measures to protect fluvial ecosystems.

River ecosystems provide crucial services that allow for the expansion and well-being of other organisms, particularly humans. Clean water and fluvial systems are necessary for agriculture, industry, waste disposal, and recreational activities [1]. Complex interactions within river systems provide integral support for terrestrial and aquatic biota. Particularly, the biodiversity of these ecosystems reflects health and provides resistance to biotic and abiotic changes that allow the ecosystem to thrive continually. While the ecological community in rivers is more biodiverse than terrestrial and marine ecosystems, they are more threatened due to the introduction of nonnative species and human changes to the landscape [2]. However, these ecosystems are more difficult to protect because of the numerous factors that influence these ecosystems, including upstream drainage, migration of species from downstream systems, and the surrounding land, especially the riparian zone, along a given body of water [3].

Alterations to the landscape near bodies of water as a result of agricultural practices decrease water quality and increase exposure to sunlight, specifically through the reduction of riparian buffers. Reduced riparian coverage results in several harmful effects, including increased stream temperature and erosion and decreased biotic integrity and biodiversity, causing an increase in periphyton abundance, which specifically favors larger fish that would otherwise inhabit larger volumes of water [4,5]. Additionally, agriculture and human settlement contribute toward increased water pollution, which can cause pollutant concentrations to reach toxic levels, further threatening biodiversity [6]. The effects and concentrations of pollutants can be directly assessed by measuring an aquatic ecosystem’s chemical indicators [7].

In addition to measuring the chemical indicators within a stream to assess water pollution, the invertebrates within an ecosystem provide a meaningful indication of biodiversity and water quality [8]. Particularly, communities of Pleurocera, a genus of freshwater snails, influence other invertebrate populations. As a gastropod, Pleurocera consumes food shared by other macroinvertebrates, including macrophytes, epiphytes, and detritus, are common and are not especially resistant to pollution [9], meaning Pleurocera populations may indicate the health of a stream. To provide a complete depiction of an ecosystem’s water quality, chemical indicators can be used with measures of biodiversity [10].

Recognized as the most biodiverse fluvial system in the United States, the Duck River provides essential resources for inhabitants of Middle Tennessee [11]. Like other river systems, the Duck River’s biodiversity is threatened by nonnative species and human activities. In recent years, two nonnative fish species have been reported in the Duck River: the bighead carp (Hypophthalmichthys nobilis) and silver carp (Hypophthalmichthys molitrix), which currently pose a limited threat to the health of the ecosystem [12]. However, human changes to the landscape are measurably changing species distribution, and some practices may be a legitimate threat to future biodiversity in the Duck River [13].

The Duck River spans 284 miles across the state of Tennessee. Along a 35 mile stretch of the river, six tributaries were selected. Numbered 1-6, each site was chosen along an independent tributary according to two criteria. The first is the volume of water, as these bodies of water can pose a safety concern. As a rule of thumb, safe sites were wadable and fewer than one meter deep. Sites 2 and 5 are more than 5 miles from the Duck River due to both site’s size and volume of water downstream. Second, each site had to be accessible, meaning the site must be publicly available and within proximity (< 10 miles) to other sites.

Each site was visited once weekly for five weeks, from May to July, from 9 am to 3 pm. Streams were visited in random clusters of 2, 3, or 4 per day, and the order of data collection was also randomized. Two main variables were assessed in the data collection periods: water quality and macroinvertebrate population.

Measurements of chemical indicators were taken to assess pollutants in each stream and for comparison between sites. Water temperature, pH, and electrical conductivity (mS/cm) were taken at each site using a HI9813 portable meter manufactured by Hanna instruments. While an uncommon indication of water quality, electrical conductivity was measured as an indication of the prominence of wastewater pollution in the stream, which has been established in more recent studies [14]. For both pH and electrical conductivity values, a temperature correction coefficient of 2%/C° was applied. Each week, the instrument was re-calibrated using a pH seven solution and a 1,500 mg/L calibration solution. Nitrate, nitrite, ammonia, phosphate, and chlorine concentrations were determined using Hach reagents and a color wheel. For all recorded values of nitrate, nitrite, ammonia, phosphate, and chlorine, a minimum of two individuals agreed upon the associated value reflected by the color wheel. Each chemical indicator’s concentration was compared with established water quality baseline conditions and concentrations from both the EPA [15] and independent researchers [16, 17].

Macroinvertebrate abundance was measured by collecting every macroinvertebrate within a designated area of .3 square meters, which was determined large enough to encompass several large rocks. These areas were sectioned off using a square box (55 by 55cm) and placed in water fewer than six inches deep. Each rock was overturned and examined for invertebrates living on, under, or below the rock within this area. A minimum of two individuals inspected each rock to ensure a minimal number of invertebrates went undocumented. Each searched rock was discarded from the area and each invertebrate was photographed and similarly removed from the designated area. This process repeated until every large rock (2x2cm or larger) was searched and discarded. After each rock was withdrawn, the top layer of the substrate was removed with a rake to uncover burrowing invertebrates, namely bivalves. Following the data collection period, the photographed organisms were identified and cataloged by species. For analytical use, species were grouped into one of four categories: bivalves (clams and mussels), gastropods (freshwater snails), crustaceans (crayfish), and insect larvae (dobsonflies, stoneflies, mayflies, water-penny beetles, and caddisflies). This process was repeated for each of the six sites and five weeks of data collection. Gastropods were particularly difficult to identify due to ecophenotypic variation in shell shapes and were later identified two months after the sampling period according to characteristics listed by the FWGNA project [18].

A comparison of chemical indicators between sites serves to present sources of variation across streams. Figure 1 presents three measurements of water quality at six different locations: mean pH, electrical conductivity (μS/cm), and water temperature (C°). Concentrations of nitrate, nitrite, ammonia, phosphate, and chlorine were excluded due to high variability. Values of pH were highest in site 5 (x̄ = 8.53), peaking at 8.95, and lowest in sites 1 and 4 (x̄ = 7.7, 7.79). The highest mean electrical conductivity (Figure 1B) was found in site 6 and the lowest in site 4 (x̄ = 220, 108 μS/cm). Mean water temperature (Figure 1C) was highest in site 5, peaking at a temperature of 27.6 C°, and least in site 4, with the lowest value of 15.6 C°. A significant positive correlation (Figure 1D) was observed between pH and temperature (p < .001; N = 30; r² = .74). 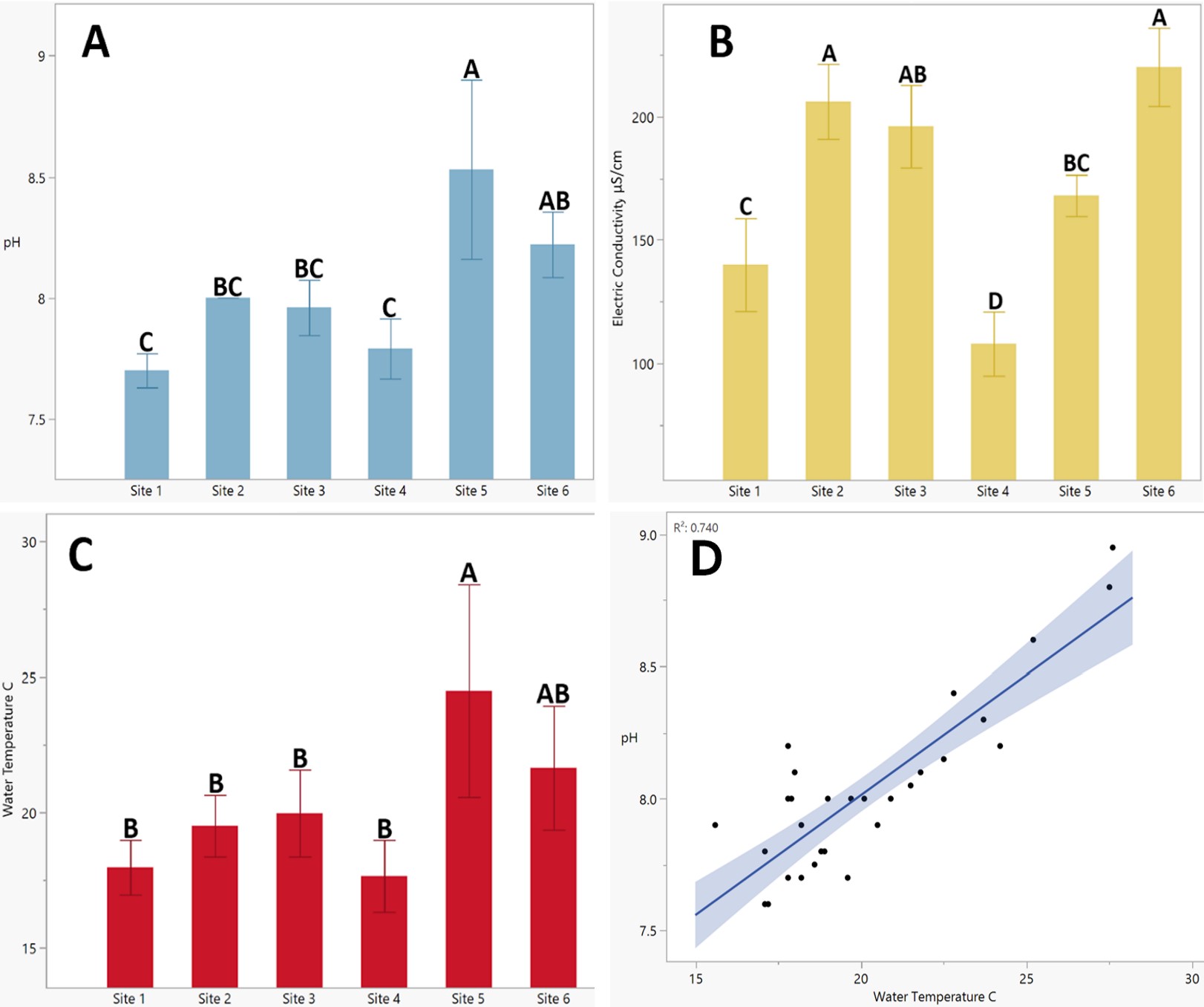 Figure 1. Charts of the mean and standard deviation of stream pH (1A), electrical conductivity (1B), and water temperature (1C). Significance between means is denoted by different letters, which are present in Figures 1A, 1B, and 1C (p < .05). Figure 1D is a plot of the significant positive relationship between pH and water temperature with line of fit and error (p < .001; N = 30; r²(28) = .74). 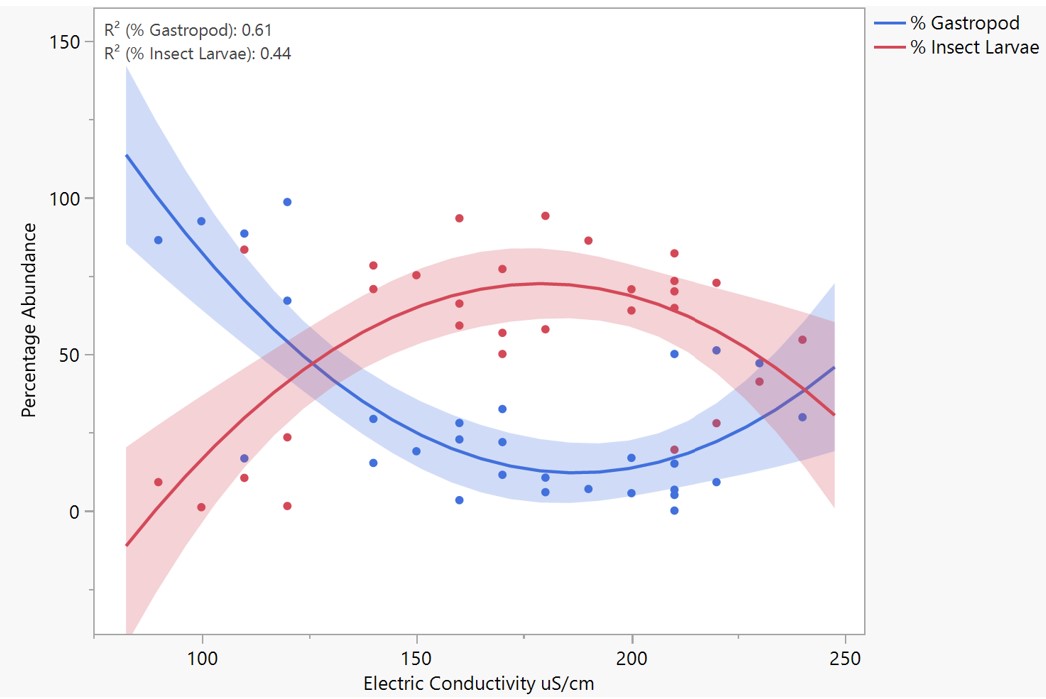 Differences in pH and water temperature (Figure 1A and Figure 1C) are both not inherently problematic but affect the chemical interactions and properties of other indicators. Between pH and water temperature, a positive trend was observed, which is contrary to the expected interaction between the two indicators as H+ ions tend to disassociate as temperature increases, lowering the pH [21]. However, this trend can be most likely attributed to error in the time of sampling, which was randomized between the times of 9 am and 3 pm, the most photosynthetically productive time of day. When organisms such as periphyton are most active, the intake of dissolved carbon dioxide is highest, driving an increase in pH. Thus, more exposure to sunlight would be reflected by increases in water temperature and high pH measurements. In the context of this study, this trend may indicate that site 5 has lower riparian canopy coverage in comparison to the remaining sites. The significant decrease in the riparian coverage over a stream would likely be due to geomorphological differences or insufficient foliage, which could be caused by agricultural practices.

The remaining chemical indicators, ammonia, nitrate, nitrite, chlorine, and phosphate, were not significantly different among streams. While differences were observed between streams, the data was not significant due to high variability, which could be due to a variety of confounding variables that contribute to the chemicals’ volatility such as rain, seasonality, and nearby fertilizer use.

Differing macroinvertebrate distributions occurred between streams, a possible effect of differences in water quality by site. As reflected in Figure 2D, insect larvae constitute most of the organisms found in streams except for site 4, which is not unusual as the category “insect larvae” includes 13 species. However, site 4 is a relative anomaly in the sites from which samples were collected, as gastropods are the majority and only consist of one species, Pleurocera laqueata. Pleurocera laqueata are found in every other stream that was sampled, meaning site 4 likely has stream characteristics that are conducive to its survival and competition. While the low electrical conductivity of site 4 may be a cause (Figure 3), analysis of additional chemical indicators would be necessary for making conclusions regarding the distribution of Pleurocera laqueata in site 4, especially calcium concentrations, which affect freshwater snail populations [22, 23].

Among streams, gastropod abundance has a significant negative correlation with insect larvae but does not strongly correlate with either crustaceans or bivalves, suggesting that across streams, gastropods may directly compete with insect larvae but not with crustaceans or bivalves. These correlations may be attributed to shared diet and habitats, as both gastropods and insect larvae were primarily found attached to rocks, while crustaceans were found under rocks, and bivalves were buried in the substrate. The high presence of gastropods in site 4 negatively correlated with insect larvae populations, which impacted the stream’s biodiversity and interactions between organisms. Thus, factors conducive to Pleurocera laqueata will significantly alter the environment, whether naturally or by human cause.

Significant differences in water quality across streams correlated with changes in macroinvertebrate population and distribution. Further, stream observations indicate and emphasize the negative impact of human activities on water quality and macroinvertebrate populations. The specific roles of these impacts on stream health and quality were not observed in entirety. However, the quantification and description of these influences do demonstrate the potential effects of several measured qualities, which can be reinvestigated and expanded upon to gain a better understanding of the factors that contribute to a stream’s health, an understanding that can better guide the enforcement of more effective protective restrictions on fluvial ecosystems.

I would like to thank the School for Science and Math at Vanderbilt for funding and providing supervision for this project. Special thanks to my instructors, Dr. Eeds, Dr. Haag, and Dr. Stanton, for consistent help and feedback throughout the entirety of this project. 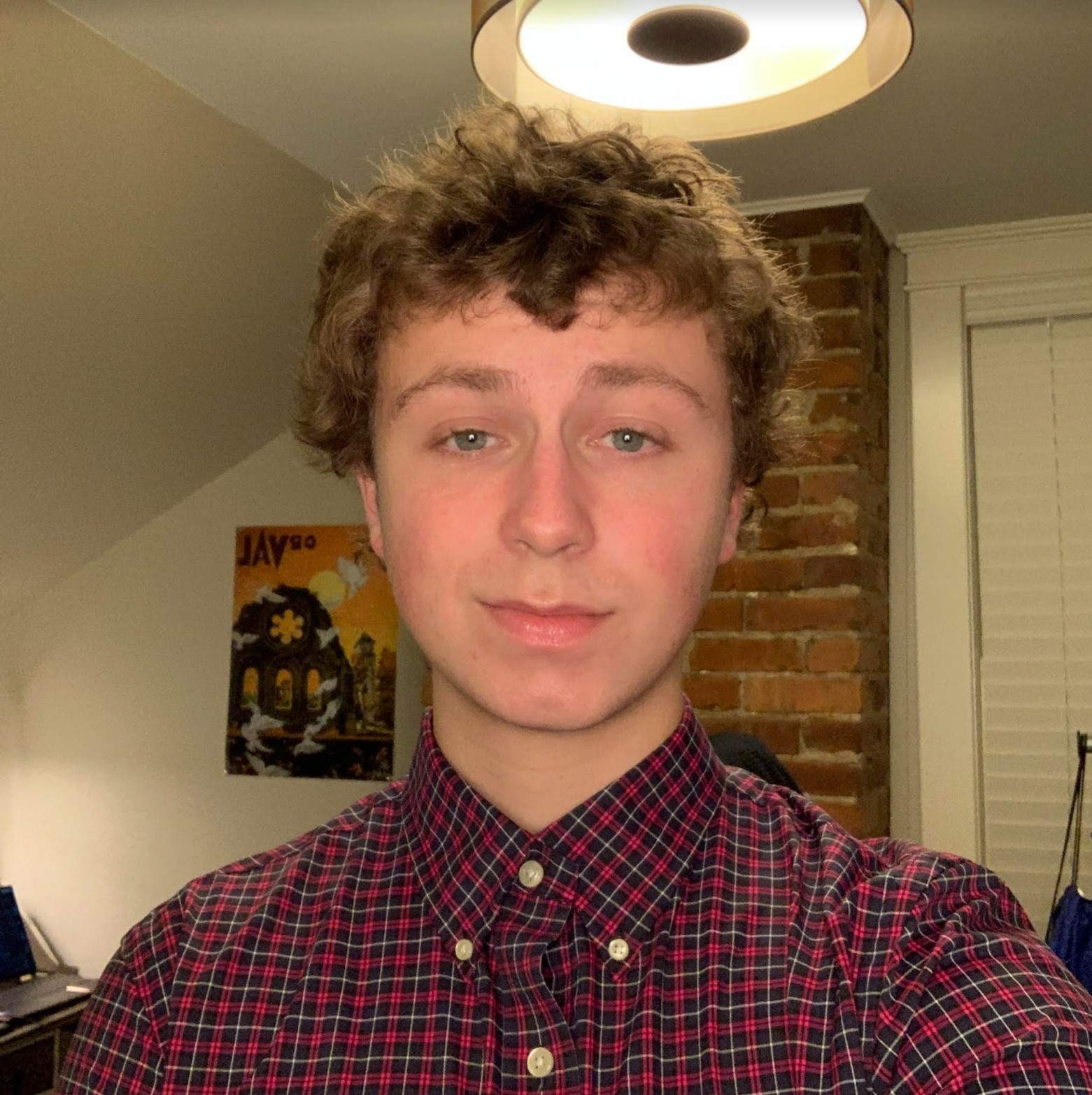