Screens have become an increasingly large part of everyday life for work, school, and entertainment. However, existing research on the effects of screen use and everyday activities including sleep and physical activity (PA) has yielded conflicting results. This study uses survey data to determine how screen use, sleep, PA, and school setting (online/in-person) predict depressive mood in high-school students. Time spent on social media and texting/messaging on weekdays predicted an increase in severity of depressive mood for all students (all ps<0.05). However, significant associations with severity of depressive mood were present for time spent on calls (p<0.001), in online classes (p<0.01), watching movies/television (p=0.01), and texting/messaging (p=0.03) only for in-person students. Additionally, more sleep was found to lower the severity of depressive mood for all students (p<0.001, r=-0.5), and for in-person students (p=0.003, r=-0.64). PA lowered the risk of depressive mood (p<0.05). These results suggest that more research is needed to examine the relationship between everyday activities and mental health in adolescents, especially as many schools shift to a more online/screen-based setting post-pandemic.

The past few decades have seen digital technology become unavoidable in daily life. Every day, people used screens to text and video call not just family and friends, but teachers, bosses, and classmates as they attended school and work from home. During the Covid-19 pandemic, this practice became more common as in-person meetings were made difficult. Many adolescents (who already spent an average of 7+ hours per day looking at a screen) increased their screen time to participate in online school [1].

Undeveloped adolescent brains are vulnerable to mental health conditions, resulting in a high prevalence of depression in this age group [2]. A study done on American adolescents found that the prevalence of major depressive episodes in adolescents increased from 8.7% to 11.3% from 2005-2014 [3]. Other studies have suggested that increased screen time (ST) may be the cause of this increase [4, 5, 6, 7, 8].

However, research on the association between ST and depression has been inconclusive. Some studies have found that overall screen time is not an accurate predictor of depression [9]. Other research has shown that sleep and physical activity (PA) mediate the relationship between ST and mental health [5]. Given the conflicting results of previous research, this study attempts to clarify the effects of ST, PA, and sleep on depressive mood.

Prior to study participation, parental consent and minor assent was obtained via REDCap. High-school students (N=48, 40 female, mean age=16.5 years, range 14-18) participated by taking a survey sent out via Google forms. Participants were enrolled in Hume-Fogg Academic High School and/or the School for Science and Math at Vanderbilt. The survey link was sent to possible participants via Hume-Fogg class GroupMes, SMS, and email; data were deidentified. Of those who participated in the survey, 39.6% (n=19) were attending school in-person, and 60.4% (n=29) were in asynchronous/virtual school.

To assess sleep during the spring 2021 semester, participants were instructed to estimate (to the nearest half-hour) their sleep on an average weekday and weekend night.

Data on both moderate (MA) and vigorous physical activity (VA) were collected. Questions were taken from the International Physical Activity Questionnaire (IPAQ) (short version) [12]. Participants were first asked how many days and hours per day in a typical 7-day week they spent on MA or VA.

To assess depressive mood, the 8-item Patient Health Questionnaire (PHQ-8) was used. Participants indicated how often they had experienced eight symptoms of depression from not at all to almost every day during the spring 2021 semester. Scores (0-24) were calculated by re-coding each response as not at all=0, several days=1, more than half the days=2, and almost every day=3 and adding the total number from all 8 questions. A cut-off score of 10 is a reliable indicator of presence of depressive mood [13]. Depressive mood was classified as mild, moderate, moderately severe, or severe with cut points of 5, 10, 15, and 20, respectively [13].

All analyses were performed in JMP Student Edition. First, analysis for controls (sex, age, race, and grade) were included as possible cofounding variables. Standard Least Squares Regressions were used to model the effects of each independent ST category, total ST, PA, and sleep on severity of depressive mood. School type was added as a moderator. Individual ST categories were continuous variables, taken from the means of the upper and lower limits of the response indicated by each student (e.g. a student response of 1-2 hours per day on social media was re-coded as 1.5) as done in previous research (14). Total ST was calculated by adding the numeric value from individual ST categories. Finally, ANOVAs were used to analyze the association between physical activity and school setting and depressive mood.

Both severity and risk of depressive mood were used as dependent variables in the analyses. Severity was included as a continuous variable, with (0-4) representing minimal to severe depressive mood, and a 1-point increase representing an increase in severity from minimal to mild, mild to moderate,  moderate to moderately severe, or moderately severe to severe. Risk was included as an ordinal variable, and participants were given either a “yes” or “no” (indicated by a cutoff score of 10 on the PHQ-8) to identify students who had a high likelihood of screening positive for depression. This cutoff score groups those with minimal or mild severity in the “no” group and those with moderate to severe in the “yes” category.

A One-way ANOVA showed that there was no difference in the number of students in each type of school (in-person or asynchronous/virtual) who were classified as having minimal, mild, moderate, moderately severe, and severe depressive mood (p=0.56). 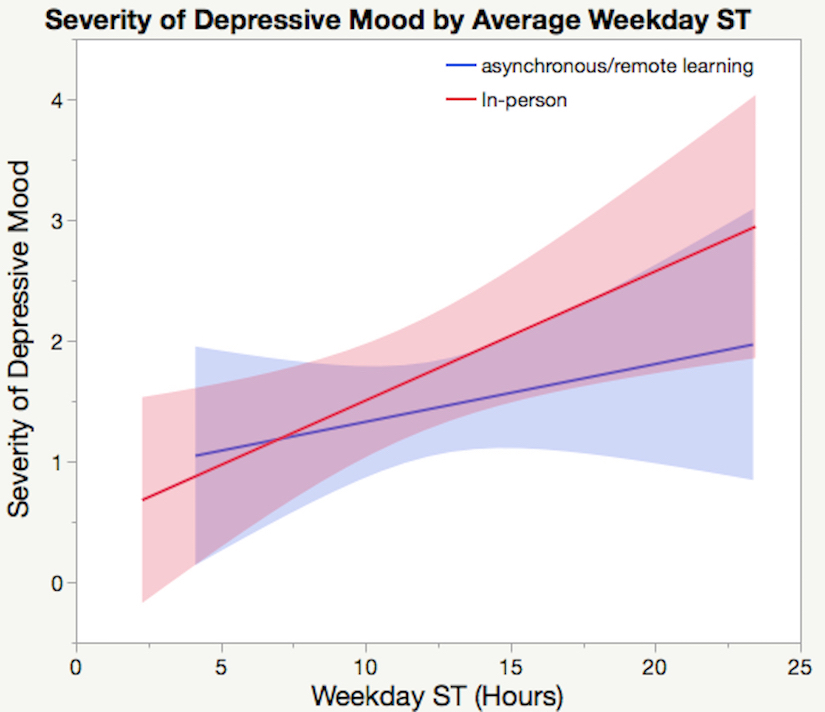 Figure 1. Standard least squares regression of severity of depressive mood predicted by average weekday ST in hours. The light red and blue areas represent the confidence region for the fitted line. For all students combined, increases in weekday ST predicted more severe depressive mood (p=0.01, r=0.36). While this association remained significant for in-person students when divided by school type (p=0.01, r=0.56), it was not significant for asynchronous/virtual students (p>0.05). 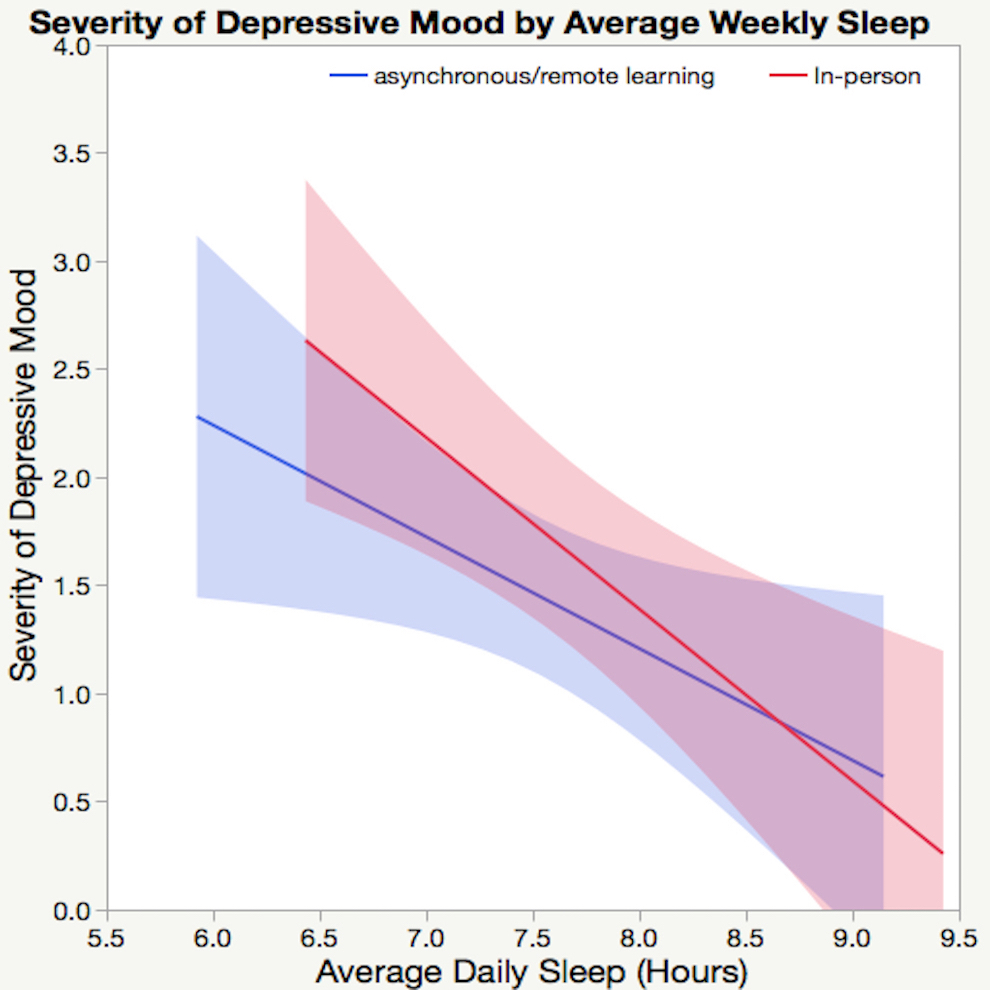 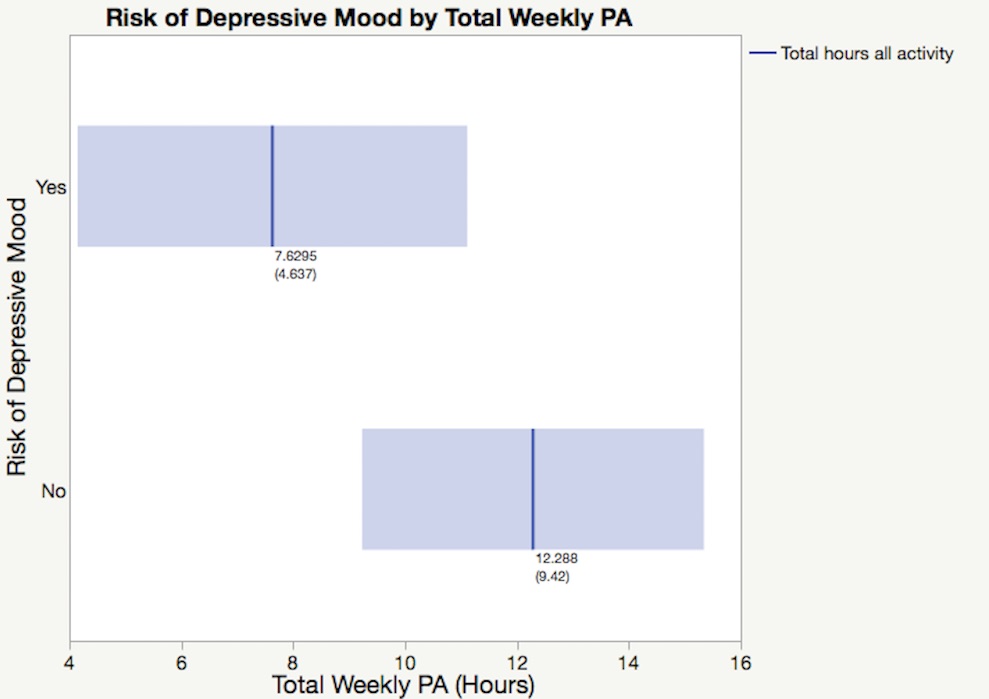 Figure 3. One-way ANOVA of depressive mood by total hours of physical activity per week shows that students who classify as having high risk for depressive mood spend less time being physically active (p=0.049. r2=0.09). Numbers directly beneath the best fit denote means and (standard deviation). The light blue area represents the confidence region for the fitted line of total weekly PA in hours.

This study gives insight not only to the relationship between overall screen time and depression, but also the relationship between specific types of screen use, exercise, sleep, school setting, and mental health. While overall screen time on weekdays did have a positive correlation with severity of depressive mood, only a few specific types of screen use on weekdays were correlated with an increase in severity of depressive mood. For all students, although overall screen time was correlated with a decline in mental health, this association was only present in two categories of screen use: social media and communication (texting, messaging, etc.). This is in line with previous research that has suggested social media has one of the largest negative impacts on mental health [4, 6]. When separating for school setting, four individual categories of ST (calls, school-related calls, movies/TV, and other communication) had a positive correlation with severity of depressive mood for in-person students while only communication was correlated with an increase in asynchronous/remote-learning students. Additionally, the associations between weekend screen use and depressive mood were weaker in comparison to weekday screen use.

Furthermore, the difference observed between interactions of screen use and depressive mood of in-person and online students may be due to a selection bias between students who chose to attend school in-person and those who chose to continue studying asynchronously. Students in this study were given the opportunity to choose if they would rather stay in online learning or return to school in-person. Those who chose to return in person may have done so because they were not as able to handle online school and screen time had a more negative effect on them to begin with. However, an alternative explanation is that the additional stresses of being in an in-school environment (such as social challenges, noise, and more teacher supervision) may amplify the stress/harm to mental health already caused by screen use. The interaction between the social setting at school and online may be the cause of the more pronounced effect of ST on mental health of in-person students.

The results showed that sleep and PA were both beneficial for mental health as they were associated with decreased depressive mood in high school students. This is in accordance with the majority of previous research on ST and PA with depression [5, 7]. However, when MA and VA were analyzed separately, only MA was correlated with presence of depressive mood. Future research on the different effects of different types and efforts of physical activity on mental health would provide more insight to this relationship.

Future directions for this research are to analyze the differences in associations between ST and depression in males and females, as past research has shown that gender plays a role in how ST impacts mental health [4, 12]. In addition to analyzing differences between gender, future research on sleep, ST, and depression would be improved by multiple variables for quantifying sleep, such as sleep quality in addition to sleep duration. Though only sleep duration was used in this study, other factors such as sleep quality may have an impact on results as previous research has shown poor sleep is a risk factor for depression [5].

I would like to thank Dr. Menton Deweese for her help as my project advisor as well as everyone at the School for Science and Math at Vanderbilt for making this project possible. 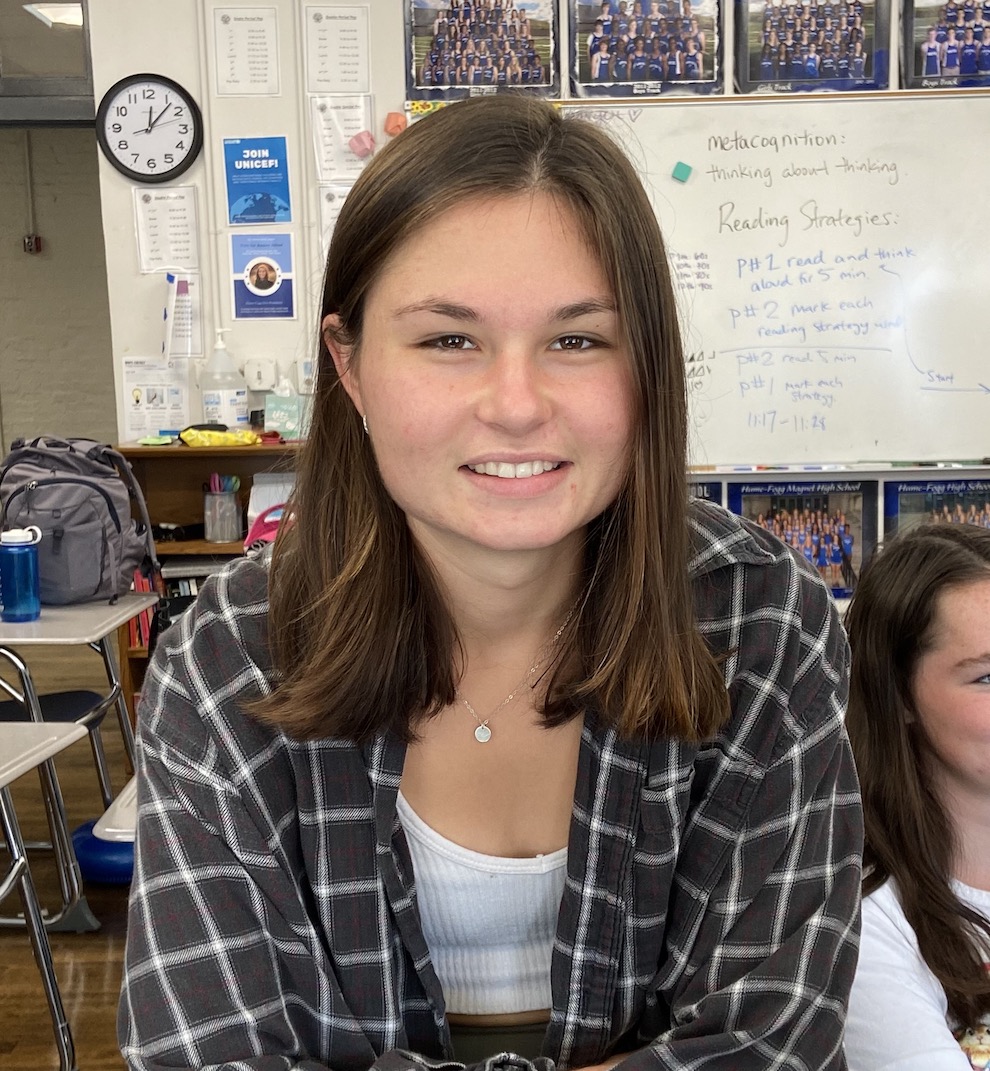